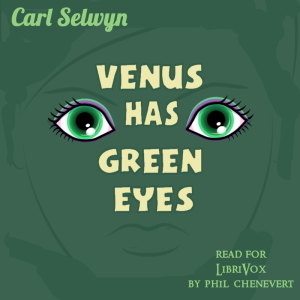 LibriVox recording of Venus Has Green Eyes by Carl Selwyn.
Read in English by Phil Chenevert
Flip Miller was a man about the universe, surviving one harrowing escapade after another and seeking for the lucky break that would make his fortune. Finally he had found in in a scrap of a map to a lost mine on Venus. Only he was foolish enough to search it out in the steaming jungle of that mud covered planet. But it was true and unbelievable riches were soon to be his. Well, as soon as he could get a ride out of the mud island where his plane had broken down. The one thing he was never afraid of in all his adventures were women. Were there women on this planet that might just might not fall for his rugged looks and boundless self confidence. Of course not. Captain Vixen, the princess of Venus may just be a type of woman he hasn't met before and one worthy of his mettle. If he loses this battle of the sexes, then of course he will die. Will he teach even this fierce wild woman what if feels like to be a true woman in the arms of a strong man? Listen and find out. ( philc)
For further information, including links to online text, reader information, RSS feeds, CD cover or other formats (if available), please go to the LibriVox catalog page for this recording.